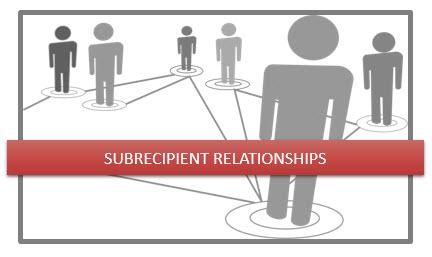 When MIT is the recipient of a prime award, collaborating institutions that are engaged by MIT to participate in carrying out a portion of the project’s scope of work with funding from the prime award are known as “subrecipients” or subawardees. The award that MIT issues to the subrecipient is referred to as the “subaward,” and is processed by the RAS Subawards Team. To be designated as a subawardee, the collaborating institution must designate a PI, who is acting as a collaborator with the MIT PI in carrying out a portion of the project.  A key feature of the subawardee designation is the nature of the collaborative relationship vs. a consultant who does not have decision-making input on the larger scope of the project, or a vendor who is providing services that it provides to others in a competitive business environment. The Subawards Team at RAS can help you with the determination of a subawardee.

The MIT PI is relying on their collaborative partners – subrecipients - to carry out a portion of the project’s scope of work. The subrecipient is compelled to do this and comply with the terms and conditions of the subaward agreement that contains both MIT requirements and "flows down" the terms and conditions of the prime award.  The MIT PI is responsible for monitoring the subrecipient for compliance and for performance of the work proposed. MIT is ultimately responsible for ensuring that the project is properly performed, and that the funding is spent appropriately.