What is a Subaward?

When MIT Principal Investigators partner with another PI and institution to carry out a portion of a project awarded to MIT, we will issue a subaward agreement to allocate a portion of the work to be carried out at the other institution. In these cases, the subrecipient PI will be responsible for the design, conduct and reporting of the research. The organization must have the appropriate facilities to be able to carry out the work, and the organization's policies and procedures must be sufficient to ensure the responsible use of sponsored funds. This relationship is different than a purchase or service agreement, or a work for hire relationship. Note that this determination has a significant impact on the project budget.

The RAS Subawards Team issues and administers subawards in compliance with MIT Policies and Procedures, the applicable sponsor regulations, and the terms and conditions of the prime award, with the ultimate goal of ensuring that the subaward activities satisfy Institute, sponsor and government requirements and protecting the interests of our sponsors and MIT. The Subawards Team is managed by Victoria Grafflin.

Subawards have a pre-award and post-award lifecycle, with different considerations and processes at each stage: 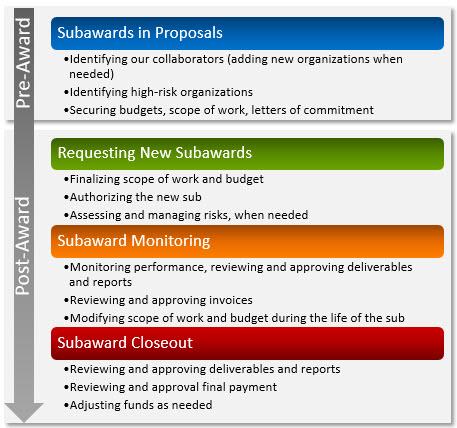 Contact the RAS Subawards Team with any questions at subawards@mit.edu